A CARTOON THAT’S MORE REAL THAN “THE PITCH” 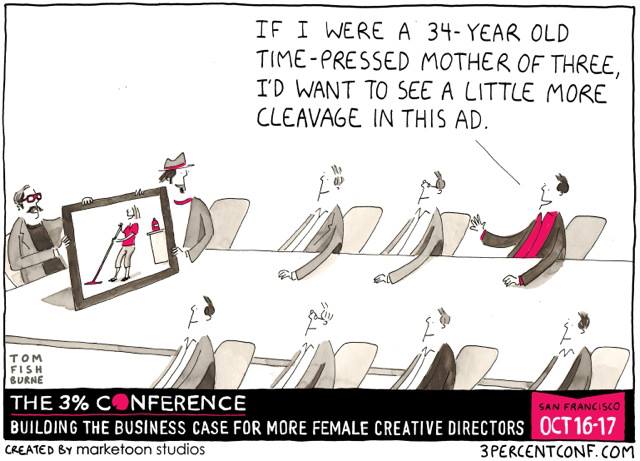 Kat Gordon, founder of the 3% Conference shared this cartoon with us after she saw PADV’s appearance on AMC’s The Pitch. Kat had originally commissioned the cartoon for the 3% Conference in San Francisco last year, and told us to “Feel free to share it.” After we stopped laughing, we decided to take her up on it.

Unfortunately, it’s only funny, because it’s true. Women, even today, are still being left out of advertising decision making and as a result, a majority of shoppers are being ignored by advertisers. Fortunately, when such a huge segment of the marketplace is being ignored, it opens up opportunities for those who choose to take advantage of it.

Truth is, in general, men do have trouble connecting with women. It is a leitmotif for the ages, just ask any ex-boyfriend… Hell, ask any husband. However the problem goes beyond male domination of the advertising hierarchy, it affects every advertiser’s female customer base as well. You can only get away with ads like Virgin Mobil’s tasteless Christmas “Necklace… or Chloroform” headline fiasco so many times before you will have to apologize for it or pay a hefty price in sales and goodwill.

Women control over 70% of all spending decisions in this country, but they account for only 3% of agency creative directors. The result is that female end customers, shoppers and influencers are overlooked or outright insulted by the majority of advertisers, especially traditional advertisers. One of the reasons Suzanne Marks decided to appear on The Pitch was to show the potential of female creative leaders in capturing the imagination and pocketbooks of that enormous audience segment. Then PADV learned that women were the actual target audience. Women’s fashions were the product, and women control virtually 100% of those buying decisions.

For women’s fashions especially, no creative talent pool exists that better understands how to approach women than women. They understand the subtleties of crowdsourcing and speaking with women as opposed to speaking at them. The women behind Lululemon and Dove’s “Real Beauty” campaigns have fully exploited their connection, and the results speak for themselves.

Women respond to the subtleties of the social media extension of word-of-mouth advertising. Crowdsourcing, as Lululemon has proven, is rewriting the book on marketing. So called “mommy blogger networks” share advice, opinions, and stories along with product information. They are trusted and get invaluable feedback that translates into better products, customer service and profits. If you choose to ignore those bloggers (or social media generally) you miss out on the power of interactive collaboration that has become a proverb for our time.

Any merchants who want to capture their share of the over 70% of spending decisions in the marketplace have to acknowledge that, as the saying goes, sometimes the best man for the job is a woman.