A Lightning Tour With Incredible Success

What a difference a decade makes. In 2007, Lauren Marks suffered a hemorrhagic stroke that destroyed her Brocca’s area and left her with a vocabulary of less than 50 words. Undeterred, she fought to regain her fluency, and wrote a book about her ordeal, “A Stitch of Time.” Last month, she completed a whirlwind 2-week book tour that included New York, Chicago, St. Louis and Los Angeles to promote it. At each stop, she read from her book and answered questions from an audience that included patients, care givers and speech disorder specialists. 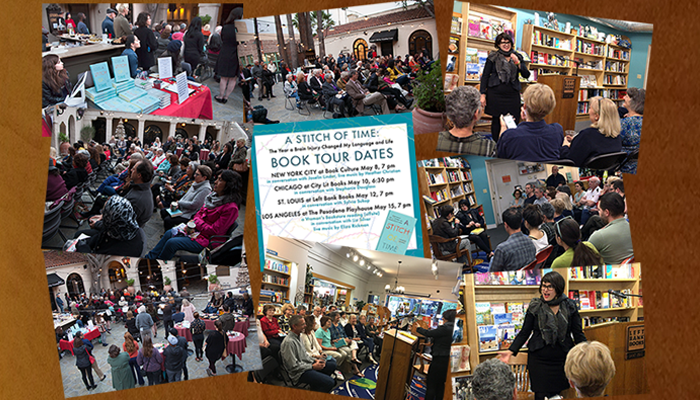 The tour featured record-breaking attendance at events in New York and St. Louis, a first-ever book reading at the Pasadena Playhouse, sponsored by Vroman’s Bookstore, and in Chicago, a thunder and lightning deluge of biblical proportions not only washed out a Chicago White Sox game but nearly canceled the City Lit Bookstore reading itself. But what made the success of this tour so mind-staggering is that it happened at all.

When a cerebral aneurysm bursts, the first symptom, for over 40% of victims, is death. Of those who survive the initial hemorrhage, 40 to 50% will succumb to vasospasms within the first two weeks. The odds against her survival were great, and the damage done to her speech and language centers of her brain was devastating. One day she was an active actress, writer, director, reviewer, dramaturge and PHD student, and the next, she was adrift in a wordless world of only vaguely familiar shapes, images and sounds. Her writing was reduced to gibberish. 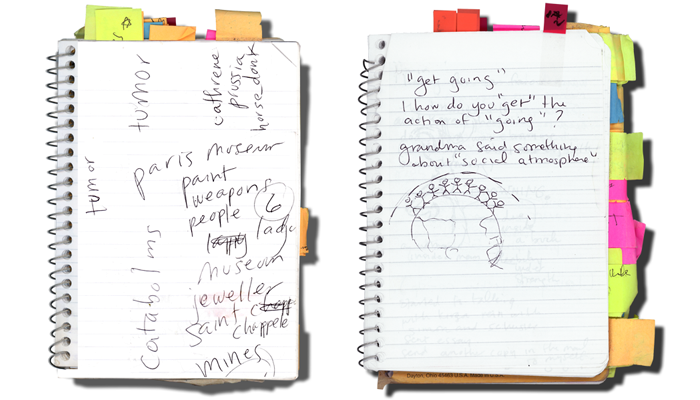 After 3 non-stop months of hard work with speech therapists, a sense of syntax returned.

These were her actual first notes. Originally, they were simply exercises to help rebuild her vocabulary from her original 50 words. However, those fractured words and scribbles became the foundation of her story: a brain shrouded shorthand that somehow described the thoughts and feelings she had on those early weeks and months. Later she discovered that she could rebuild the meanings behind those scribbles (because she lived them). Once retrieved, she took these fragile musings of her damaged mind and constructed a compelling story of courage, recovery and rediscovery.
Her writing helped her relearn the English language and all its peculiarities, and simultaneously she mastered the skills she needed to make her story come to life. The resulting memoir, “A Stitch of Time” has attracted audiences from everyday readers to serious academics and medical professionals.  Not content with merely creating this work, she tackled the basics of marketing it.
By November 2008, she was dissecting her notes and pulling out the threads she needed to tell her story. She learned how to use the text-to-speech function to proof her work and correct the artifacts of her aphasia that she couldn’t see herself. Just over a year from her hemorrhage, she was well into mastering her language and finding her voice. That is when she began to market her story with a website, the first of three. 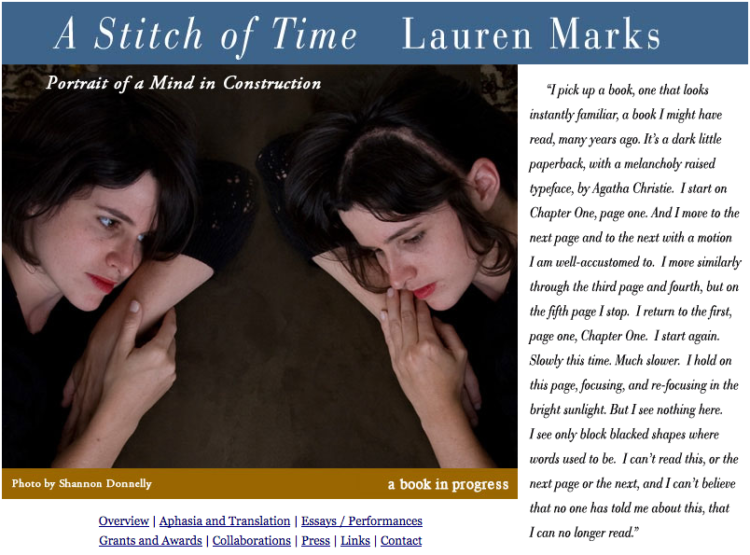 At the same time, she accelerated her storytelling skills studying under Amy Friedman at UCLA and found her place in the writing community through grants and fellowships with the Bread Loaf Writing Conference, Virginia Center for the Creative Arts (VCCA), VCCA France, Ragdale, Atlantic Center for the Arts, and Yaddo. She refined her voice through performances at Second Story in Chicago, The Moth in Los Angeles and the West Hollywood Book Fair, Silverlake Jubilee, Hotel Café, The Hammer Museum, and L.A. Book Fair.

During this time, she established herself as an active advocate for those who live with language disorders such as aphasia. She connected with neurological and academic communities through scientific articles and speaking at California State University Northridge (Department of Speech and Language Disorders), UC San Diego (Brain and Cognition Lab-director with VS Ramachandran), the Royal College of Art in London (Visual Art), and University College London (Psychology and Language Sciences). 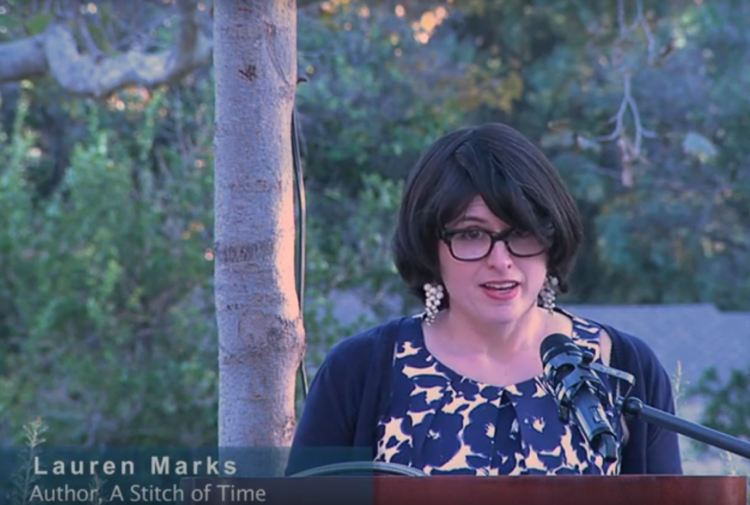 By the time Lauren sold her book to Simon and Schuster, she had already forged connections with speech pathologists and leading neuroscientists around the country and the world. To promote her book release last month, she designed a complete I.D. campaign anchored by her revised, award-winning website designed for people with speech disorders and their friends and families.

She stayed on top of every aspect of her comprehensive tour plan that combined print, broadcast, online and promotional items. She provided book stores in all four cities on her tour with materials for their events. Working with her publisher’s PR team, she set up interviews with prominent local radio personalities and seminars at community medical speech pathology centers. In each city, she had teams of friends and advocates working with her to find the right venues for her unique message.

Lauren’s remarkable tour culminated in Los Angeles at the first-ever collaboration between Vroman’s Book Store and The Pasadena Playhouse. On this chilly night, the seats were packed and the standing-room-only crowd stretched beyond the courtyard and up the stairways to the top balcony. At the sales table, the Vroman’s staff said it was the largest crowd they’d ever seen at a reading. 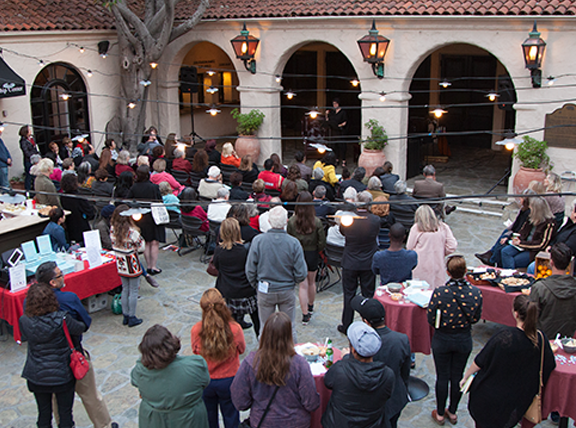 Her book itself is undeniably remarkable, however much of the tour’s response and reaction is directly attributable to her uncanny campaign management. While I’d like to attribute that to my superior marketing and advertising skills, in truth, I learned more from her than she did from me. She is fearless and irrepressible.

She was and continues to be an inspiration to me. I think that her ability to inspire is the major attraction of her book. Not her recovery, because every aphasic recovers differently to varying degrees of success. Her story provides unique insight into how far people can go when they push their limits and use every ounce of their ability to achieve their goals.

If you know someone who could benefit from inspiration, “A Stitch of Time” is for them.