“Do Not feed the trolls!”  It’s a saying as old as the Internet. It means “don’t encourage the anonymous, glory-seeking cyberbullies” who get their jollies spewing inflammatory posts anywhere there’s an audience on the web. Not feeding them is excellent advice whenever you encounter someone trolling on your blogs, surveys or online polls, using phony Facebook, Twitter, and email usernames. 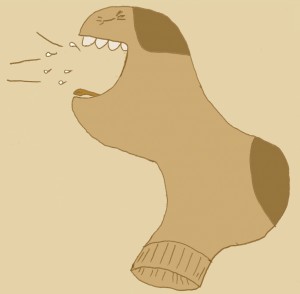 Wikipedia identifies many varieties of online trolls: “Ballot stuffers,” “Strawman Sockpuppets,” and “Meatpuppets,” although my personal favorite is “Flying Monkeys.” The reason you shouldn’t encourage anyone of the troll persuasion is that it’s like giving cocaine to an addict. And a flying monkey on drugs is not a pretty sight.

The only sure-fire defense against these glory suckers is, don’t draw an audience. Be invisible. Do nothing. Don’t make any impact. Don’t ever fail, and certainly, don’t ever succeed. Nothing irks these antagonistic online dilettantes more than success. Success is as foreign to them as integrity. All they want is an audience, and since they can’t get one on their own, they have to settle for yours. They’ll latch onto your success and suck out what glory they can like a leach on a fat pig’s butt.

Maybe they just need some love.  So rather than clip their leathery wings, allow me to offer some friendly advice.

I know this comes as a shock to some of you, but when you try to hide behind anonymous identities – everybody knows. That’s the problem with hiding behind a curtain. You’re not in Kansas anymore.  You’re actually exposed. All your intended victim has to do is look you up, find out when your identity was created, and search for any history you might have. It’s easy. And once discovered, you have no integrity, no legitimacy, and you look like sniveling cowards. You and your spurious points of view get ignored. As Ray Pensador points out in An Open Letter To Trolls And Sockpuppets, whenever anyone compulsively rails wildly about anything, the audience soon realizes “the opposite is most likely true.”

What’s worse, if your intended victim cares enough to find out your IP address, you could be humiliated… or worse.  Ouch! Of course, you choose to reveal your identities and stand up for what you believe, but then you might have to at least act a little smarter. That could be hard.

Especially for you “infantile” sockpuppets who are born, do your deed and die within just a few days. From my personal experience, you little bile spewers spring into being straight from Zeus’s ear, learn English, open email, Facebook and Twitter accounts, spew your “opinions,” and before you can even soil your diapers, disappear as quickly as you appeared.

So, dear trolls, I leave you with this. If you like to make trouble for your own amusement, so be it. Go ahead, whip out your witchy flames and hurl them at anyone with an audience and their dog Toto too. Just don’t expect anyone to care, except the most flammable scarecrows. Everyone on the Internet knows what you are. And most of us have thicker skin.

Just don’t expect anyone to feed you.