What is the modern definition of “Stupid Sell?” 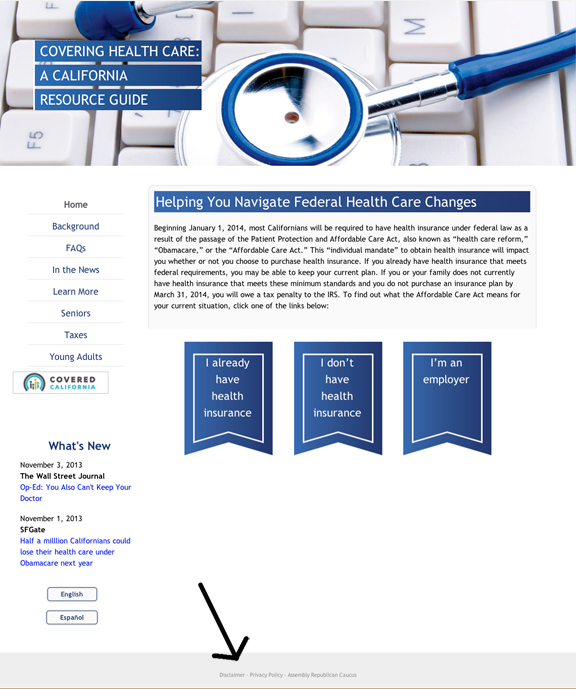 This website is a hoax. “Covering Health Care CA” has nothing to do with the State’s official “Covered California,” even though there is a link to it on the home page. Nor is it, as it purports to be, the voice of the California General Assembly. It is instead the “official” California Assembly Republican Caucus counter position to the Affordable Care Act.

Sadly, an actual site to present the Republican position and concerns would be valuable, but for some reason, the authors decided not to claim ownership. Instead, they hide their affiliation in minuscule mouse type, at the bottom of the web pages, in a faded grey, to blend into the footer bar (see arrow). As of December 6, 2013, there was no mention of the spoof site on the Republican Caucus home page.

No matter what your position is on the Affordable Care Act, this site is an embarrassment. No one can make a legitimate point while hiding behind a phony identity. However, even on their “disclaimer” page, they pretend to represent the entire California Assembly.

The fact is the majority of the California State Assembly had absolutely nothing to do with this site or even had any knowledge that it existed. Since it was put up, the site itself has become little more than an object of derision. It is hurting the California Republican Party, not helping any constituents either Republican or Democrat, and worst of all, it was paid for with taxpayer money.

Back in the sixties, Leo Burnett described the only two types of advertising as “smart sell and stupid sell.” Today, this site is the new definition of “stupid sell.”