“Make Music Pasadena” – How A Free Festival Payed Off

We have been a part of the Old Pasadena Management District from its inception, so we were deeply involved with the 2014 Make Music Pasadena. For this year’s fesitval, Steve Mulheim, Janet Swartz and our OPMD board made plans to drive visitors to our merchants and stakeholders all over the district. We had 3 main stages to work with: on Colorado Blvd, at the Levitt Pavilion and the Armory Center for the Arts. Add to those, more than a dozen stages down streets and alleyways, and in shops and restaurants, because individual business owners chose to set up their own stages in house.

Old Pasadena has been putting this free festival on for six years, and every year has been a little more successful, but this year, we discovered how to make the crowds themselves participants in their own crowd control. For one, with so many stages all over town, no matter which way crowds turned, they were headed toward music. And we experimented with adding more set-up time between acts. We hoped that whenever the bands on stage finished their sets, their most ardent fans wouldn’t wait around for 20 minutes for the next act to set up, especially with other music playing within ear shot. And it worked. The fans cleared the street in front of the stage and took a 5-minute walk (or less) to the next music venue… and, along the way, encountered some other bands tucked away that tickled their fancies.

The expected attendance for Make Music Pasadena city-wide was 25,000 people, but estimates for Old Pasadena alone were closer to 30 to 35,000. Yet, unlike years past when the crowds were concentrated almost entirely in front of the main stage on Colorado Boulevard, these fans were spread remarkably evenly throughout Old Pasadena. 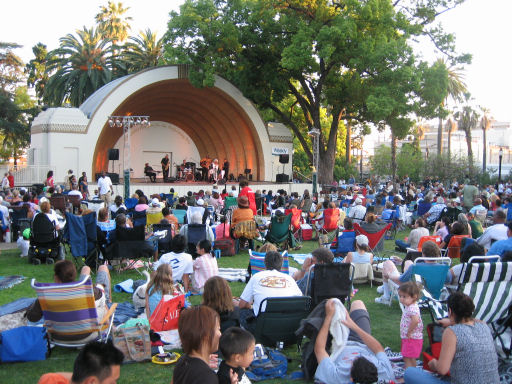 In Memorial Park, families set up picnic lunches in front of the Levitt Pavilion

In Old Pasadena, that meant that visitors who only knew the shops and restaurants on Colorado Boulevard discovered Green Street, the restaurants on Raymond, Mill’s Place and the shops on Holly. Merchants reported a spike in sales that astounded them. Marci Toombs at the award-winning Lula Mae gift boutique on Holly Street said, “I had more business this year, than I had when we had a stage at the other end of our street.” Partially, that was because Holly Street was the route to two other main stages, and partially it was due to the bands playing in the courtyard of The Majestical Roof just down the street. With all the stages on the streets, in the parks and in the alleys, there was something for everyone. Folk, rock, country, Latin, world, and in the evening, even while the bars and restaurants were keeping their patrons awake with throbbing, driving rock, singers such as Eliza Rickman played a quiet set of truly unique, eclectic sounds on the stage of Lineage Dance Studios on Fair Oaks. What a lovely way to end the day.

Eliza Rickman accompanies herself on a toy piano on the Lineage Stage. For her “Start With Goodbye” video: https://www.youtube.com/watch?v=LtEGD1JcMOg

After all was said and done, this year’s Make Music Pasadena was the most successful for Old Pasadena. Not only for the entertainment of our visitors, but also for the bottom line of our stakeholders. The strategies and tactics which had been planned for months to entice our audiences and guide them throughout our 22-block district succeeded beyond our wildest dreams. The enthusiastic support and participation of our independent merchants, bars and restaurants helped enormously as evidenced by the crowd outside of Jakes of Pasadena (above). At Everson Royce, bands were set up in the parking lot in the back, which not only prevented sound interference from the adjacent venue, it guided the crowd through the Everson Royce store to get to the entertainment. Every visitor and fan of the band playing saw everything the store had to offer on the way to the set. That wasn’t hard sell. It wasn’t even soft sell. It was great sell. For more information about Make Music Pasadena and the Old Pasadena Management District, go to www.oldpasadena.org, or call Janet Swartz at (626) 356.9725. For PADV of course, email us at accts@pasadenaadv.com or call Tony at (626) 584-0011.