Get To The Greatest Generation’s Heart Through Their Boomers

We’ve all heard it. The Greatest Generation is too old. Too set in their ways. And they’re cheap to boot. Can it actually pay off to try and reach them? Sometimes the answer is right in front of your face.

Baby boomers and their parents are living longer than anyone expected. “Most boomers’ parents are in their 80’s, and even though they might not call themselves “the Greatest,” it’s a better name than “senior citizen.” As PADV discovered, most don’t like the name “senior” anything.

They are well known for being fiercely independent, but they do listen to what their children have to say.  These parents raised the boomers, sent them to college, and were always there when the kids needed help.  Now, just as though those parents are tightening their retirement purse strings, their Boomer kids have the means to return the favor. You can’t do business with the Greatest Generation without reaching out to the Boomers they raised.

PADV created a website that had to speak to both audiences: the Generation Great parents – who are in no hurry to go off to a Home, and their Boomer children – who want to know their parents are healthy and well. Stay Home Safe has a business model that provides the right answers for both audiences.

To reach the two generations simultaneously, PADV established a sensibility that appealed to both. The scenes chosen for the site’s headers portrayed the abundant love-of-life of the senior parents, while the shaded frame for those lifestyle photos was a straightforward graphic design that appealed to the Boomers’ sense of professionalism and experience. Even the message was simple, “Comfort, convenience and peace of mind.” 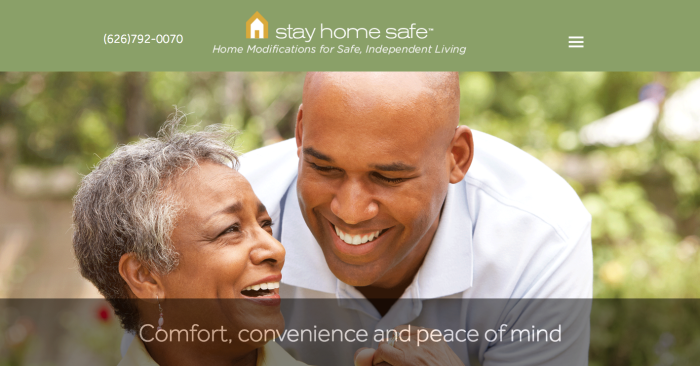 Stay Home SafeTM is primarily some talented contractors who specialize in making homes safer for senior citizens like themselves. At over 80 years old, these contractors are almost exactly the image of their own primary target audience, except they have no patience for retirement. They see themselves as more than just hardware vendors with the ability to install hand holds, ramps, and wheelchair elevators, because they build environments that combine safety and style. As hard working members of the Greatest Generation, they deeply understand how important independence is… And how dangerous a slip or fall can be. They address both concerns equally.

Considering this generation’s distrust of advertising, Stay Home Safe chose not to proudly proclaim how reliable and proficient they are for themselves, instead they let their customers say it for them. The Testimonials page layout is intentionally fashioned to be easy-to-read. The type size and the simple, easily-distinguishable copy blocks makes comprehension easier. The calm, sky-blue bands relieve the glare of bright white light that can tire older eyes. The efficiency of the page design appeals to both audiences. 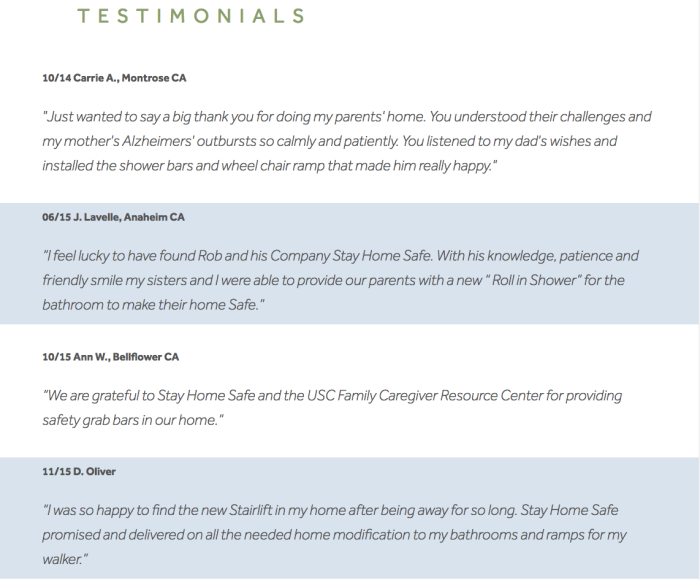 The greatest generation is alive and well and still making a difference. They are a viable market for a wide range of products, but they are more prone to bargain hunting than virtually all age segments. Most Boomers are still working, and they want only the best for their parents. More importantly, boomers have the largest annual dollar spend per household of any generation. [1]Therefore you need to spark the imagination of both generations, the parents and their progeny, to win the hearts of the Greatest Generation.

Depending on the product, it could conceivably be a challenge to reach both those audiences at the same time, but it would be fiscally irresponsible not to try.